Surviving the Blitz: How the High Photography Halloween Blitz Began

Ghosts, goblins and ghouls- Oh My! Well, actually it was more like puppys, piggies and raindrops this year. That’s right, just wrapped up my annual Halloween Blitz. Despite a rainy cool day we managed to make it work out. We borrowed the neighbor’s spare garage (she had better lighting than mine) and moved everything indoors for the second year in a row. From what I saw the kids didn’t mind, there were a lot of smiles and cuteness flying around.

Most people don’t know, but this Halloween Blitz is my favorite photography project all year. It’s a labor of love more than anything, as I know financially, its break-even. Trust me, you don’t want to know what the props, editing, toys, and advertising effort adds up to- actually I don’t either- I might not want to do it! Just kidding, I would never NOT want to do this, it’s a labor of love and what most don’t know…its therapy.

In 2009 my oldest son was celebrating his first Halloween and I was pregnant with his little brother. I set up the first Halloween backdrop to capture my son’s first Halloween and soon expanded the offer to my friends with new babies- after all, it was up still, why not use it?  That was in October 27th. A few days later, on Halloween night, I went into premature labor and we lost our second son, Mason at 24 weeks.

Then next year, in 2010, I was beginning to find it very hard to be excited as October approached, despite trying to stay upbeat for my older son. Halloween had been my favorite holiday; now I was dreading it. Once more though I brought out the Halloween décor and did my pictures and few friend’s pictures. When it was done, I realized I had salvaged something fun out of October after all. It was right about then that I knew, I may not be able to have a birthday party for my older son, but I could sure do something else in his honor. Hence, the Halloween Blitz was born.

For the next year or two it remained low-key, open to existing clients and friends only. Then last year, in 2012, I decided to open it up publicly to great response. This year I did the same and for the most part I’m happy with the results. I did have 3 no-shows which was very disheartening, as I had a waiting list of people. I know next year there will be a blitz but it will have to be run differently. Maybe a pre-pay requirement, maybe a deposit, I’m not sure. I don’t want to risk no-shows again. It takes a lot of the fun out of the day, with my guilt weighing down on me that I had people who had to miss out.

Still, as I edited the pictures of all the little munchkins last night, I knew again it was all worth it! I may not be taking Mason’s birthday pictures as any mother would long to do, but at least I can make lots of little kids (and their parents) happy and save some of those precious memories for them. 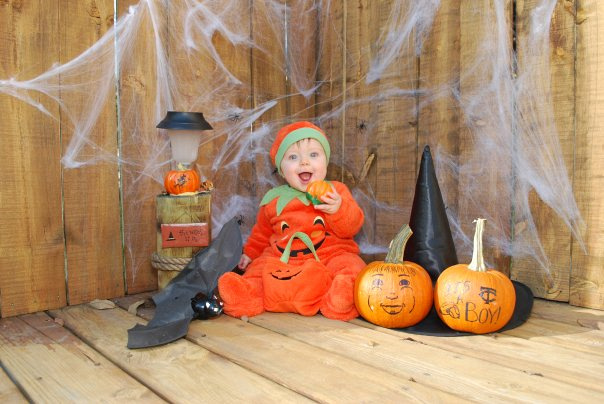 The First Pumpkin. My oldest in what was to become the first Halloween Blitz mini-shoot. Notice the pumpkin to the right? It says, "It's a Boy" announcing what his baby brother will be. Also, since they were likely to be born within the same calendar year they would be known as "Irish Twins", hence the Minnesota Twins logo. We called the baby, "Twinkie"

My oldest in what was to become the first Halloween Blitz mini-shoot. Notice the pumpkin to the right? It says, "It's a Boy" announcing what his baby brother will be. Also, since they were likely to be born within the same calendar year they would be known as "Irish Twins", hence the Minnesota Twins logo. We called the baby, "Twinkie"